What is affinity chromatography?
Preserving the chemical environment
Manual use
Pre-made buffers

What is affinity chromatography

Affinity chromatography is the specific type of chromatography used in molecular biology research, as it enables the separation of given proteins from mixtures of bacterial cell lysates, buffers, etc. The concept of affinity is that some specific property of the target protein (size, presence of tags previously added for this purpose, chemical bonding including hydrogen bonding, disulfide bridges, ionic interactions, etc.) can be used to bind it to a stationary phase, while compounds that do not meet that criteria can be washed away. The protein can then be eluted into a solution that contains the target protein only, resulting in its purification from the original mixture. 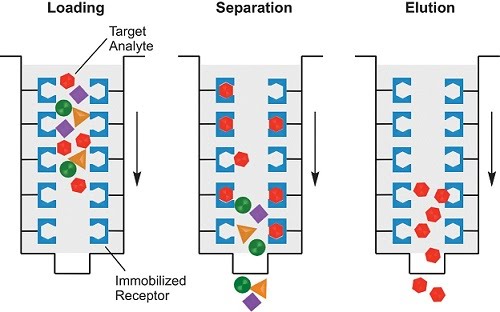 In order to preserve the chemical environment for each step, different buffers are used for loading, washing (separating) and eluting. A common binding tag used to separate proteins is a His tag which consists of 6 histidine amino acids joined together. It can be genetically engineered into any DNA that codes for the target protein. Therefore, the protein will be synthesised with an extra part – the His tag – at the start or end of its sequence. The His tag can then be used to bind the target protein to the stationary phase, and separate it from all the other proteins in the mixture (without the tag) using a nickel column.

You can see it’s a nickel column just by its blue colour. Purification columns for chromatography come in many shapes and sizes. The smaller ones can be used for small volumes, while the largest ones are used in conjunction with automatic pumping machines.

Manual use involves passing the original mixed solution with the target protein through the column (loading), followed by washing the column multiple times with a special buffer to remove the unwanted components. Lastly, and the most critical step, is elution. This washes away the bound target protein from the column in a yet another specialised buffer, where it can be stored for longer in its purified medium…