A strategy to maximise net productivity is an integrated system. Put simply, this is a self-contained nutrient recycling approach which involves using manure as plant fertiliser, and leftover plant “waste” as additional feed for animals. 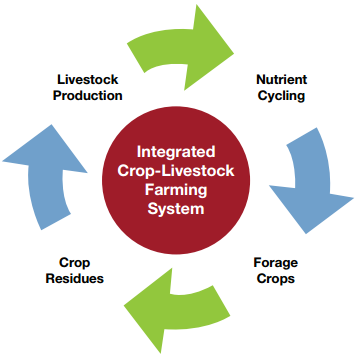 There are many issues (economical, social, ethical) surrounding intensive farming across the globe. Here are a few:

1. Prioritising land – since so much energy is inherently wasted every time plants are used for anything else apart from direct eating by us, it is both an economical and social issue to decide whether so much land should be used for plants grown simply to feed animals which then pass on a tiny fraction of energy onto us; for plants grown to produce biofuel rather than food for us; or for plants grown to end up straight onto our plates so that the energy they pass on is maximised.

2. Controlling the effects of chemicals – artificial compounds used en masse such as antibiotics and pesticides can have far-reaching impacts. For example, if fertilisers leak underground and are transported to a distant lake, they will result in an algal bloom which will cover the entire surface of the lake. All organisms living below will eventually be starved of oxygen and nutrients and die, while other species may colonise the lake and shift the flora and fauna of the area, causing a cascade of events that will radiate outwards.

3. Drawing ethical boundaries – intensive rearing of livestock comes with an array of ethical issues. The range includes forced growth using hormones, captivity in crowded conditions, mass murder for meat, mass torture for cutting off the beads of chicks, and enhancing bacterial resistance by the mass use of antibiotics preventively.

Deforestation for land space for human uses, wood or oil, such as the extensive deforestation in the Amazon, has led to both extinction concerns by the removal of animals’ habitats, as well as the challenge of balancing human production needs ….