😤 Gas exchange in mammals and plants

Isn’t that grand? Let me tell you a little secret. For anyone who’s seen the film Life starring our first Martian life form called Calvin, there is way that cells can associate the way Calvin does. In this case, cells aren’t at all differentiated to do different things in tissues, organs, etc. but instead maintain their single cell status among equal single cells. They associate at a higher level to produce certain greater effects, and can even look as if the structure were multicellular or complex, but it isn’t really, or at least it isn’t in the same way it is for true multicellular organisms.

This is the case for algae as well as for fungi and creepy Martian creatures.

The mammalian (hence human) gas exchange system is made of the trachea, from which the bronchi branch off, followed by the bronchioles into the lungs, and finally the alveoli, which are the functional unit of the lungs. Of course this is nonsense without an image: 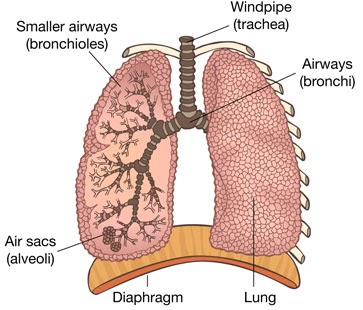 Air enters the lungs via the trachea, bronchi and bronchioles into the tiny air sacs – the alveoli…..