Meiosis enables the production of cells with half the genetic material of the parent cell. This in turn enables the joining together of two haploid cells to form a zygote that has the full number of chromosomes again e.g. diploid in humans.

Gametes are these cells that are haploid are are used as part of sexual reproduction in mammals to enable more genetically diverse offspring, compared with asexual reproduction. Gametes are egg and sperm cells. Their development through meiosis involves multiple stages, dispersed throughout an individual’s lifetime as we will see for eggs which finish the first part of development even prior to the birth of the individual who may use them later.

The precursor (primordial) cells of eggs are oogonia (oogonium, sg.) and those of sperm are spermatogonia (spermatogonium, sg.). These grow and divide (mitosis) before undergoing meiosis I, maturing into oocytes and spermatocytes. These cells are termed primary, while the resulting cells after meiosis I are termed secondary. 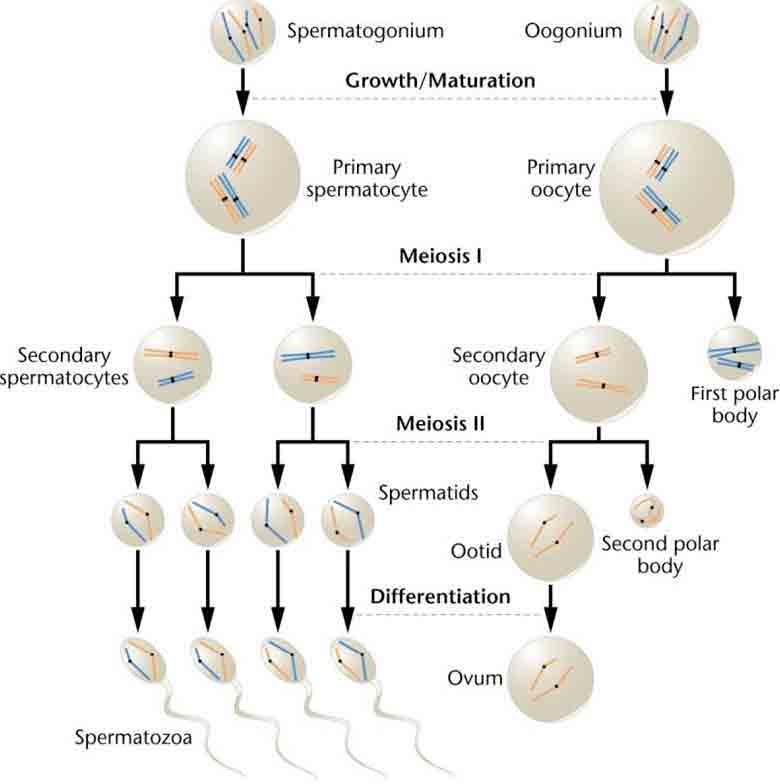 Meiosis II sees the secondary oocytes and spermatocytes divide again and produce spermatids and ootids. For sperm, this gives 4 cells, but with another second polar body (actually 3 this division, not shown; so 4 overall counting the first polar body) produced alongside the first…