The foundation of the field of epigenetics
Dutch hunger winter

The foundation of the field of epigenetics

The foundation of the field of epigenetics (changes to gene expression that do not affect the genes themselves) was spurred by a series of studies dubbed the Norrbotten studies carried out in the remote and scarcely populated Norrbotten County in Sweden, near the Arctic circle. Initially, the studies were concerned with following cohorts of newborns, their parents and then their own children and grandchildren, to study the effects of bouts of famine on their development and lifespan.

The studies were done in the 19th century, and crop failures happened unpredictably over the years and decades. By collecting data on the food availability to people, as well as their developing health over the years, it was found that bouts of plentiful food and overeating were associated with a shorter lifespan compared to times of famine when participants were children.

The offspring of those who ate too much as children were themselves affected by some of the illnesses their parents suffered from, as well as a shorter lifespan. Therefore, the effects of diet were being inherited.

Another similar study looking into the effects of diet was carried out on the children born following the Dutch Hunger Winter of 1944-45 during which people, including those pregnant, had access to little food in the range of 500 – 1,000 calories per day. This was during WWII with the Netherlands being under German occupation.

The long-term follow-up of those born following the hunger winter revealed that those subjected to hunger in the first trimester of pregnancy ended up becoming more likely to suffer from obesity and cardiovascular disease than those exposed to hunger later in pregnancy, and those born before or after the period of hunger.

Higher incidence of nervous system disorders such as schizophrenia were also found in those starved in the first trimester of pregnancy. This is the critical period for nervous system development.

People of the hunger winter cohort had lower birth weights than their control siblings. Those exposed to hunger early in pregnancy also presented decreased methylation of the IGF-2 gene compared to siblings and those exposed later in pregnancy.

IGF-2 (insulin-like growth factor 2) was investigated specifically because it promotes growth during gestation.

Twin studies have also contributed knowledge on epigenetics. Since identical twins are expected to share their DNA, any purely environmental pressures such as stress, diet, exercise, etc. could be monitored, and could show how much of an outcome e.g. appearance, disease, etc. would be attributable to genetics and how much was attributable to the environment. 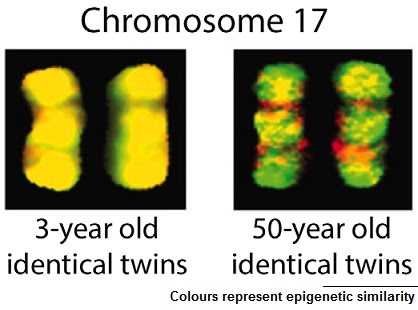