🐢 The effect of ageing on the nervous system

Alzheimer’s disease is the most prevalent type of dementia. Dementia is a disease affecting the brain, caused by an interplay of genetic and environmental factors over time. Age is the main risk factor for developing Alzheimer’s disease.

Neurons die gradually as Alzheimer’s disease progresses over several years, due to buildups of otherwise safe proteins including amyloid and tau. Amyloid forms plaques between neurons while tau forms tangles inside them. These structures result in the death of brain cells. 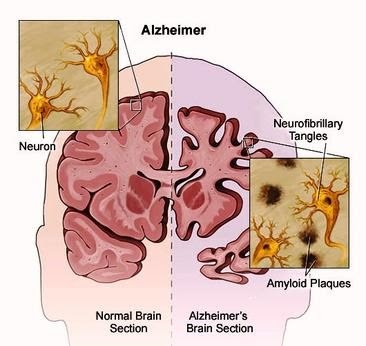 The first area of the brain affected by Alzheimer’s disease is the hippocampus. The hippocampus controls memory formation. A decreasing ability to form new memories results in the early symptoms of the disease, namely short term memory loss. Pre-existing memories are not as affected during this time. Emotion is also not affected initially, as this rests with the…