What makes up the human gas exchange system?

The mammalian (hence human) gas exchange system is made of the trachea, from which the bronchi branch off, followed by the bronchioles into the lungs, and finally the alveoli, which are the functional unit of the lungs. Of course this is nonsense without an image: 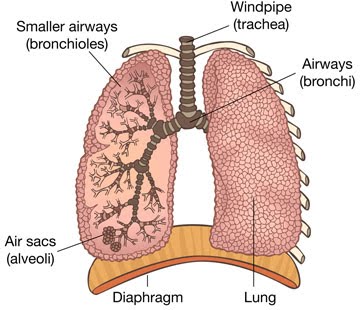 Air enters the lungs via the trachea, bronchi and bronchioles into the tiny air sacs – the alveoli. The epihelium of the alveoli is extremely thin (just one-cell wide, in fact) to allow fast diffusion of oxygen into the red blood cells, and of carbon dioxide out of them. The capillaries surrounding alveoli are so narrow, that the red blood cells have to be squished in order to pass through. This shortens the diffusion pathway, which in turn increases the rate of diffusion. 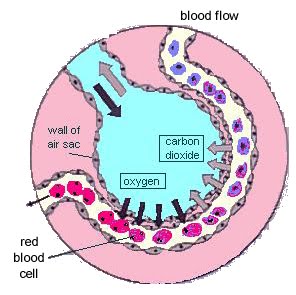 What allows diffusion to take place?

What allows diffusion to take place, of course, is the concentration gradient formed between the air in the alveoli and the red blood cells. Red blood cells deprived of oxygen and loaded with carbon dioxide (the blue/purple ones) will release carbon dioxide into the fresh air, then take up oxygen from it afterwards.

How do lungs move?

Since lungs aren’t made of muscle, how is their movement brought about in ventilation (breathing)? Intercostal (between-ribs) muscles and the diaphragm are responsible. Their contraction is caused by nerve signals from the respiratory centre in the medulla (in the brain). This results in the intercostal muscles pulling the ribs up, while the diaphragm is flat, and the abdominal organs are pushed downwards. The thorax (chest cavity) increases in volume, so lowers its pressure below that of the…