For now, we will look at ATP in isolation, as the product of a series of special reactions, themselves part of respiration. ATP is made through ADP by adding back its third phosphate, and it reacts reversibly by losing that phosphate and releasing energy.

When the hydrolysis of ATP (via the enzyme ATP hydrolase) is coupled to other reactions requiring energy, it enables these processes to take place. The inorganic phosphate released can itself take part in a further phosphorylation reaction with another chemical, often increasing its reactivity.

The condensation of ADP and inorganic phosphate takes place during photosynthesis and respiration, and is catalysed by the enzyme ATP synthase. Because it synthesises ATP. Get it get it.

ATP synthase (also known as ATP synthetase) produces ATP when hydrogen ions, H+, pass through its transmembrane channel. The reason they pass through is that there are more of them on one side of the semipermeable membrane than the other, thus being driven by an electrochemical gradient. This movement is called chemiosmosis. 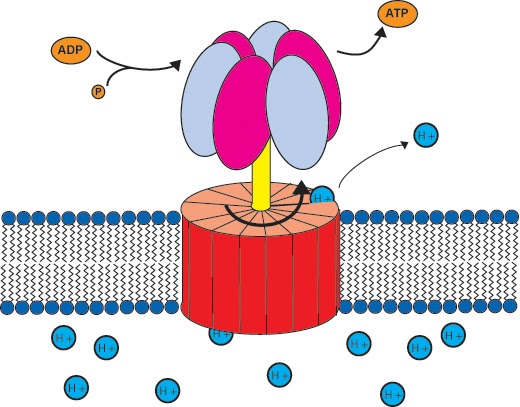 As protons (H+) are driven to cross the membrane via ATP synthase, this rotates and catalyses one ADP and one…..