Extinction events are defined by periods of great loss of biodiversity. Fossil evidence has pointed to several mass extinctions from multiple causes including the great oxygenation event following the evolution of plant photosynthesis, environmental effects caused by forces outside the Earth, and indeed the expansion of human populations.

Depending on the data used and the thresholds set for what is considered a mass extinction, at least five and as many as a couple dozen extinctions events have been identified over the course of life on Earth (more than 4 billion years). Extinctions focus on multicellular life because it is readily observable compared to microbial life. The latter, however, accounts for most of the biodiversity on Earth. In addition to this, since the fossil record relies on fossilisation, it represents those specimens that are readily able to fossilise. 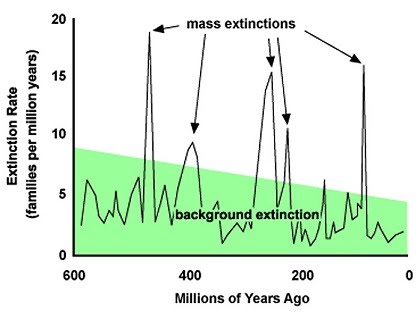 A theme of change in biodiversity surrounding extinction events is the opportunity provided by the extinction to displace the dominant species of large land animals, for example, and provide space for new species to take over. Ancient species resembling present crocodiles and birds (archosaurs) dominated the land before the Triassic-Jurassic extinction event which culled many of them, leaving space for dinosaurs to take over. Dinosaurs then went entirely extinct, bar for avian ones, during the next extinction event (Cretaceous-Paleogene), enabling the small land mammals to spread further and diversify. 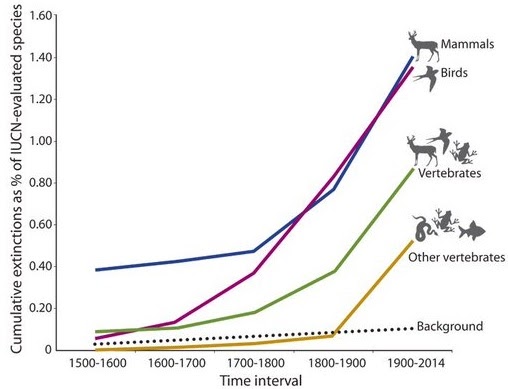 There are difficulties with estimating current and past extinction rates. Models for working rates out have produced estimates that do not match up with the fossil record. When models are based on specific traits in a species, and attempt to show the potential for that species diversifying, they produce results that exceed what is actually possible…