Gas exchange in large multicellular organisms is achieved by organs which have a large surface area and so are able to successfully provide the substances the organism needs in order to survive. In humans this is achieved by the lungs. But how does the oxygen acquired by the lungs actually reach every single cell of the body? A network of sorts is needed to do that. Many bigger and smaller tubes would come in handy. They would form like a… circulatory system. Oh wait, that’s precisely what mammals have: a circulatory system made of arteries, veins, capillaries, etc.

Plants, too, have a vascular (tubular) system. It is made of xylems and phloems. Yes, complicated names which you will love to learn about in one of the following topics (Mass transport in plants).

The key thing is that this circulation of a large amount of substances via a system of transportation is called mass flow, hence mass flow, hence mass transport. Just more technical terms for you to learn, which describe something that really couldn’t get any simpler. Water, gases chillin’ through tubes in an organism.

Haemoglobin is a type of protein. It is present in many varied organisms on our planet, and has a similar chemical structure in all of these organisms. In humans, haemoglobin is found in red blood cells. Haemoglobin’s function is the transport of oxygen around the body. Oxygen must reach all parts of our bodies because it is required in the process of cellular respiration (to produce ATP – the main molecule involved in releasing energy for all uses).

Haemoglobin is a big deal, so naturally, it has a quaternary structure (multiple protein chains linked together to form a greater functional unit which also includes inorganic molecules). Just stare in awe at this beauty: 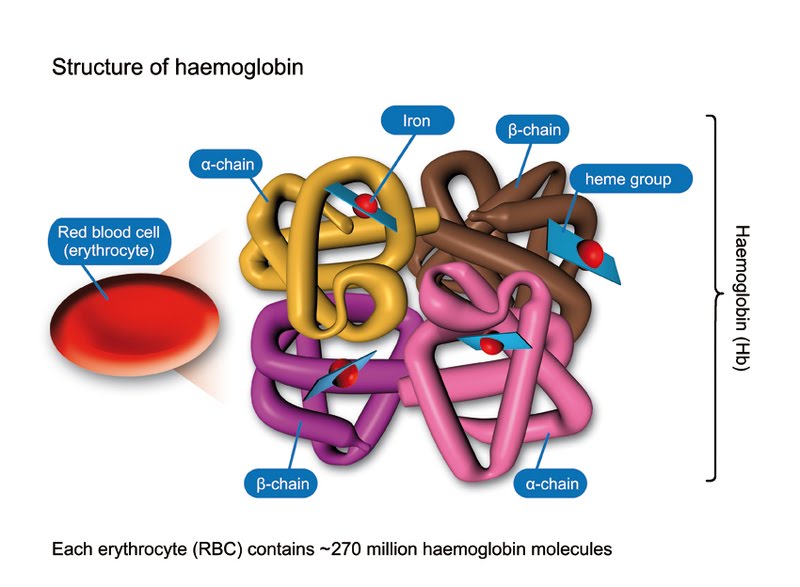 Erythrocyte is a very easy to remember name for a red blood cell. As you can see, there are 4 protein chains: 2 alpha chains and 2 beta chains. At the centre of each chain there is a haem (or heme) group which is an inorganic group containing one iron ion. The million pound question, of course, is how many iron ions are there in one haemoglobin molecule? (No, you will not be lucky enough to get that question for 10 marks in any exam.)

If you think this is all nice and easy, read on to be utterly disappointed.

Despite the fact that haemoglobins are similar in structure and function across a variety of organisms, they are adapted to different needs…