Since membrane proteins are found at the interface between cells, unsurprisingly one of their key functions is transport of molecules and ions across the membrane, since many can’t make their way on their own.

The main properties of molecules that determine how they may be transported across a membrane are solubility, size and charge. 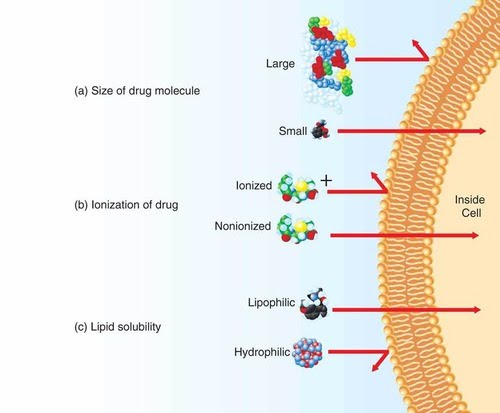 Diffusion takes place when you use a spray in a room, for example. The particles in the spray move randomly, knocking each other, which results in them spreading throughout the room gradually, from high concentration to low concentration. Therefore, diffusion acts down (or along) a concentration gradient.

It is important to know what affects the rate of diffusion. These are:

Of course there are other factors such as temperature (increased kinetic energy results in faster diffusion) and the diffusion pathway (distance). The latter is a side effect of (3.) The thickness of the exchange surface, in some respects.

Osmosis is the diffusion of water across a semi-permeable membrane. The “concentration” of water is referred to as water potential. So osmosis is the ….