The use of microorganisms has a multi-fold hazard perspective. Some microorganisms are inherently pathogenic and very dangerous to humans e.g. anthrax by Bacillus anthracis. Others, and arguably most others, are not expected to have any negative effect on humans. However, given that some species turn pathogenic in some situations, it is a good idea to treat these other species as potentially pathogenic.

On top of this, there is a separate element of genetic modification that in itself becomes a risk.

Working with microorganisms that are known pathogens is straightforward in the sense that their pathogenicity may already be well understood, and hence the precautions required to contain the risk can be established rationally and effectively. Depending on the level of risk posed by different pathogens, different biosafety levels are implemented that guide the steps required in handling the microorganism. 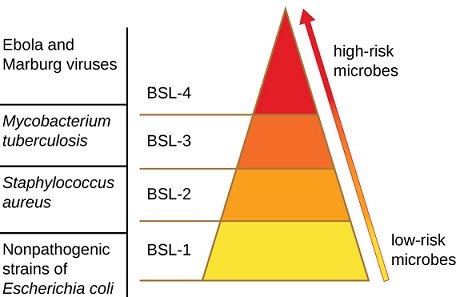 Biosafety levels 1 through 4 represent the least concern species through to the species that are known to be extremely dangerous.

Protocols regarding disinfection and sterilisation would be employed to varying degrees while working with pathogenic strains. Disinfection refers to the removal of most or all microorganisms from an inanimate object, while sterilisation is a step up and involves the removal of dead cells as well as live cells, spores, viruses and any organic element that might in itself become alive under any circumstances.

A BSL-4 lab would have many extra features in place such as special protective equipment for workers to include full body cover, a negative pressure space that actively draws in air from the outside, in order to prevent airborne pathogens from escaping into the wider…