Some insects, notably ants and some bees, display the highest level of organisation in their social structure. This structure is called eusociality and it involves a population whose individuals are reproductive or non-reproductive, and undertake different roles based on a caste system.

There may be a queen and a king who are solely reproductive, such as in termites. The rest of the population are sterile workers whose job it is to provide food by foraging and other tasks, as well as individuals tasked with defence of the colony. The roles are so strongly established, that the huge jaws of the defensive termites prevent them from being able to feed themselves. Thankfully, and perhaps a testament to the rationale and success of eusociality, the worker termites can feed them. 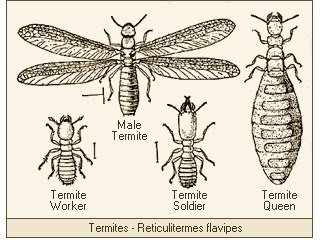