Antibiotics that actually kill bacteria are called bactericidal. Antibiotics that inhibit bacterial reproduction without killing them directly are called bacteriostatic.
Other ways in which antibiotics target and kill bacteria include interfering with their DNA replication, so they can’t replicate further, and interfering with their protein synthesis. This essentially blocks the normal running of their metabolic functions, rendering them dead or unable to replicate.

Tetracycline works this way by preventing protein synthesis. This makes it a bacteriostatic antibiotic. It works by attaching to the small (30S) subunit of the ribosome and hence preventing the tRNA carrying an amino acid from binding. Tetracycline has a binding affinity to both prokaryotic and eukaryotic 30S ribosome subunit, but unlike in humans, the tetracycline in bacteria actually gets pumped into the cell. 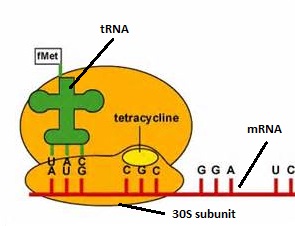 This mechanism of action renders both Gram positive and Gram negative bacteria susceptible to tetracycline action. Therefore, this is a broad spectrum antibiotic.
The use of antibiotics is a common example of how evolutionary arms races are critical in the development and deployment of medicines that target organisms. As long as some individuals in a targeted population are able to survive the antibiotic, or in time can develop resistance, under the selection pressure of antibiotic use an ever increasing resistant population will emerge.

This process can happen many times, as organisms are extremely versatile. Bacteria have already been subjected to many natural antibiotic attacks from other organisms (the original penicillin is produced by the fungus Penicillium) so they already have certain resistance genes or pathways they can develop when required.
The key is to understand the adaptation cycle of different organisms and use antibiotics effectively…
READ MORE