Pollination is the journey of the pollen grain from the anther down the style of the ovary to reach the ovule. But first, how are pollen grains and embryo sacs developed? 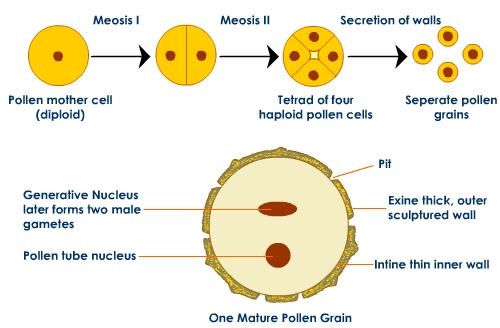 Similarly to mammalian gametes, precursor pollen cells undergo meiosis to form 4 offspring cells that become the mature pollen grains. These have specific structure that take part in different aspects of fertilisation, namely the generative nucleus which gives rise to the male gametes proper and contributes to the final zygote once in the ovule, as well as the tube nucleus whose function is to transport the pollen to the embryo sac in the ovule. 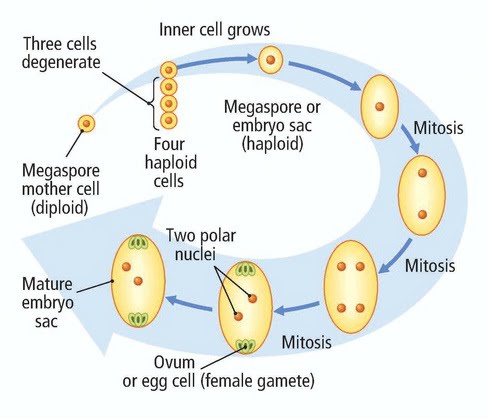 The development of the embryo sac involves many divisions. The first is meiosis which results in one inner cell that develops further and 3 other cells that degenerate (remember polar cells in ovum development in mammals? same thing!). This is now the embryo sac. and it undergoes mitosis three times. The final mitosis of a 4-nucleus cell results in the embryo sac having 8 nuclei.

That’s a lot of nuclei. One of them develops into the ovum or egg cell proper, while two nuclei become polar nuclei and will later contribute to the nutrients in the seed, alongside one of two of the pollen grain’s gametes arising from its generative nucleus. The remaining two cells either side of the egg are the synergids which are thought to assist the pollen nucleus reach the egg, while the opposing 3 cells on the other end of the embryo sac are the antipodal cells which may contribute to embryo nutrition. 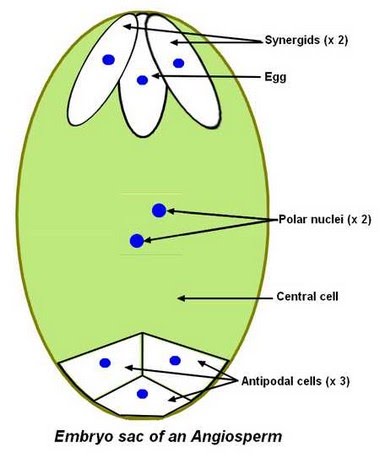 Finally, the fun part! The pollen grain makes its way towards the embryo sac down the style of the ovary. The tube nucleus develops into a pollen tube which with the help of digestive enzymes that can break….