Sampling of organisms must be like those annoying, attention-seeking Snapchat friends. It must be random. Random sampling can be carried out using quadrats. If you’re wondering what they are, look no further – they’re squares. 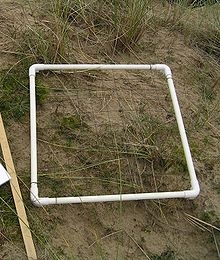 How would you make sure that your sampling is random? In a field, you could lay two long tapes perpendicularly to define the limits of the area where the samples will be taken from. 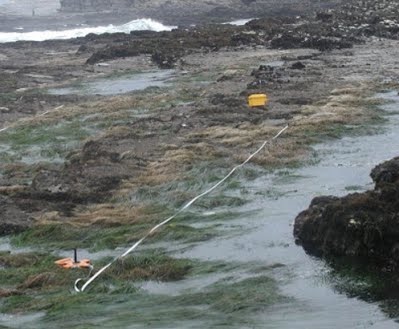 As you can see above, a tape is laid on one side of the sampling area. As you can’t see above, another tape is laid from one end of the first tape, across on the adjacent side of the sampling area (like a giant L). Then two random numbers are generated using a random numbers table. These numbers are used to determine the coordinates of the first quadrat placed on the field, by matching them on the two tapes. And voila! You have yourself a system for random sampling using quadrats.

Transects are tapes (like above) placed across an area which has some form of gradient caused by abiotic factors which directly determines the distribution and abundance of the organisms present. For example, a beach is not suited for random sampling because there are clear zones ranging from the low population zone near the sea, to the more densely inhabited areas further up the shore. In this case the best way of obtaining useful data is by systematic sampling.

After placing the tape across the shore, place quadrats at set intervals such as every 5 metres, then take your data down.