-as previously covered, and their primary defining element, they lack a nucleus; instead, their DNA is a single circular molecule freely present in the cytoplasm and not associated with any proteins such as histones in eukaryotes; however, the general area where the genetic material hangs out is termed a nucleoid. 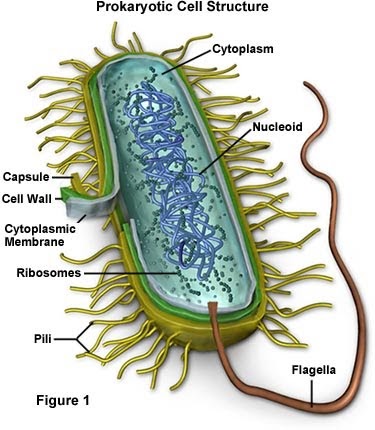 -one or more plasmids which are also circular DNA loops but much smaller; these can be exchanged between cells or even between different species as they can carry genes for antibiotic resistance.

-one or more flagella which aid in locomotion.

Amongst bacteria, the cell wall composition is a key determinant of what type they belong to. This is important in terms of predicting their response to various antibiotics. Based on different bacteria species’ response to crystal violet stain, Gram positive bacteria are able to take up the stain and appear violet under a microscope, while Gram negative bacteria do not take the stain up and will appear pink if a counterstain is added after washing off the crystal violet stain (this will persist in the Gram positive bacteria).

The difference arises because different bacteria have different cell walls. The bacterial cell wall is one of the main targets of antibiotics….