Primates including humans live in societies where individuals sustain relationships, whether emotional or utilitarian, in order to accomplish functions that would otherwise be impossible. Participation is such groups that can be very complex requires advanced learning methods in order to be able to perceive oneself and others in these relationships.

Some of the behaviours emerging from this learning are imitation and insight. Imitation involves observing the actions of another and mimicking them. Insight is an understanding of a cause and effect in a given situation. This gorilla is playing on a Nintendo DS. 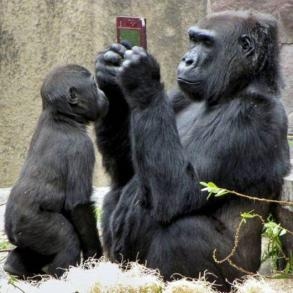 The strongest group organisation in primates is the single female and her offspring which occurs commonly in orangutans. The monogamous family group is formed of both parents and their offspring and is represented by some New World monkeys, and is a prevalent group type in humans too, even in polygamous cultures.

Polyandrous family groups consist of multiple males mating and rearing offspring with a female, found in tamarins and some humans. One-male-several-female groups do what they say on the tin, and are exhibited by langurs, gorillas and some humans. In some species the females are the core part of the group and choose the male, while in others the male is dominant over the females.

Multimale-multifemale groups contain many individuals who mate freely within the group, but not outside the group. The group members do fit into dominance hierarchies, determined by the hierarchy of their mother before them. These groups are found in savanna baboons and macaques.

Fission-fusion societies involve the breaking away from the group and joining new groups by chimpanzees, mainly the females.

The relatively long time spent by parents taking care of offspring means that they are able to learn more complex social behaviour. This includes..