A synapse is the site of communication between the end of an axon and the beginning on a dendrite. It can also be between a neuron and a non-neuron cell such as a muscle cell. In the olden days people used to think that there were no gaps between neurons, and they just extended continuously throughout the body (silly eh?). Now we know better, much better. More for you to learn! 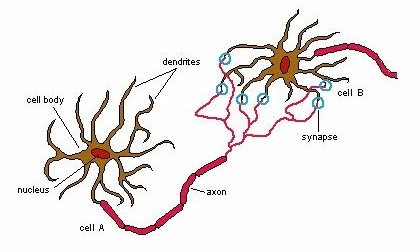 Clearly, each nerve cell (=neurone) only has one axon but multiple dendrites. How does this regulate the way in which certain signals are deemed to pass the threshold required for them to be passed along as opposed to them ceasing there?

There are 2 ways: either multiple signals are sent via the same synapse in a short space of time, or single signals are sent via synapses at different locations. Therefore, the first is called temporal summation while the second is called spatial summation. Summation simply refers to the sum of signals sent to reach the threshold for transmission…