🚆 Transport of gases in the blood

Carbon dioxide and oxygen are transported in the blood under different conditions. Carbon dioxide is more soluble than oxygen, so some of it is directly present in the blood plasma. It can also be present as bicarbonate ions which increase blood acidity and signal if there is too much CO2 in the blood and not enough O2.

Finally, both CO2 and O2 can bind to haemoglobin which is present in red blood cells. Its function is the oxygenation of tissues, as oxygen is central to aerobic respiration, the metabolic process of creating chemical energy for all cell functions. Its smaller cousin, myoglobin, stores rather than transports oxygen in the body, and instead of being found in the blood, resides in muscle tissue. It only has one haem group so can only bind one oxygen molecule, while haemoglobin binds up to 4. 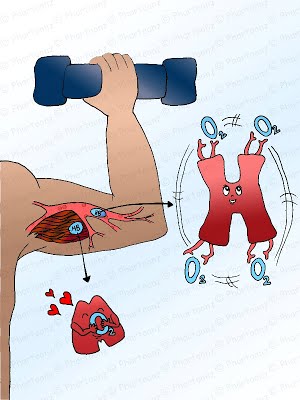 Haemoglobin is a type of protein. It is present in many varied organisms on our planet, and has a similar chemical structure in all of these organisms. In humans, haemoglobin is found in red blood cells.

Haemoglobin’s function is the transport of oxygen around the body. Oxygen must reach all parts of our bodies because it is required in the process of cellular respiration (to produce ATP – the main molecule involved in releasing energy for all uses).

Haemoglobin is a big deal, so naturally, it has a quaternary structure (multiple protein chains linked together to form a greater functional unit which also includes inorganic molecules). Just stare in awe at this beauty: 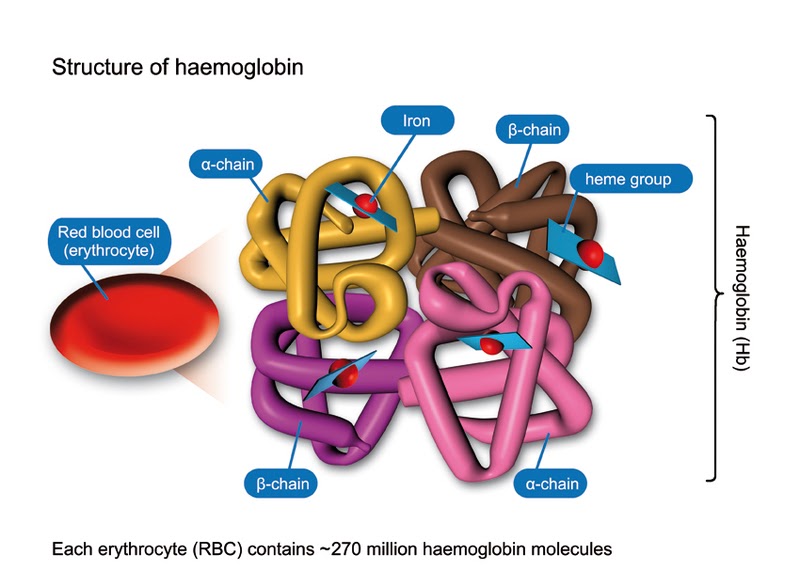 Erythrocyte is a very easy to remember name for a red blood cell. As you can see, there are 4 protein chains: 2 alpha chains and 2 beta chains. At the centre of each chain there is a haem (or heme) group which is an inorganic group containing one iron ion…