The genetic diversity between organisms is accounted for by variation in DNA. Even a tiny difference in DNA can result in a lot of variation. What’s more, even identical DNA can still result in variation due to certain genes being active and others not. Is it visible that these two have largely identical DNA? 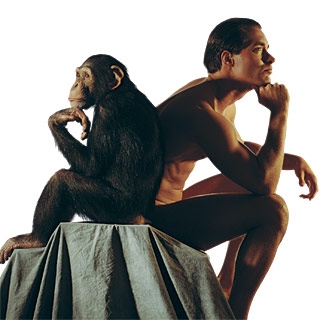 Nope. Yet when compared to bacteria or an imaginary alien, those two above definitely look more closely related. So the similarities between human DNA and chimp DNA cause the visible and functional (phenotypical) similarities such as limbs, eyes, mouth, etc. while the differences in DNA result in the phenotypical differences such as hair thickness, facial features and so forth.

This knowledge has been used for a very long time by humans to manipulate wild plants and animals in order to make them somehow useful. People selectively breed plants and animals to change their genetic profile, so that certain traits are preferred over others.

Plants are selectively bred for higher yields, while animals are bred for many different purposes, such as food production, competitive events, aesthetic features, etc.

Selective breeding always leads to a decrease in variation. Overall, variation may increase as many different breeds are created – for example with dogs. Yet within one breed, variation is very low. There are ethical issues to be considered when selectively breeding animals. Dogs bred purely for…