Water enters a plant through the roots. In order to understand how water gets in the root, you should definitely check out the root structure:

What you can see above is a delicious slice of pineapple. OK, it’s not. That is a slice of a root. Roots, as you may have seen in real life, are hairy. All those tiny and not so tiny root hairs buried into the soil greatly increase the surface area of the root. This exposes it to more water molecules which can be taken up. The hairs are nothing like human hairs; they are extensions of the outer layer of the root, made up of cells. This layer is called the epidermis.

Why does water move inside the root? Simple: osmosis. The cell sap (i.e. cell juice) has a lower water potential than the fluid found in the soil, so the water in the soil kindly makes its way into the thirsty awaiting root. Once the water reaches the first cell in its path, the water potential of that cell is increased compared to the cell next to it. Therefore, water moves into the next cell, leaving the current cell. This in turn results in the previous cell taking up water all over again, and so forth, until water makes its way across all cells of the cortex. 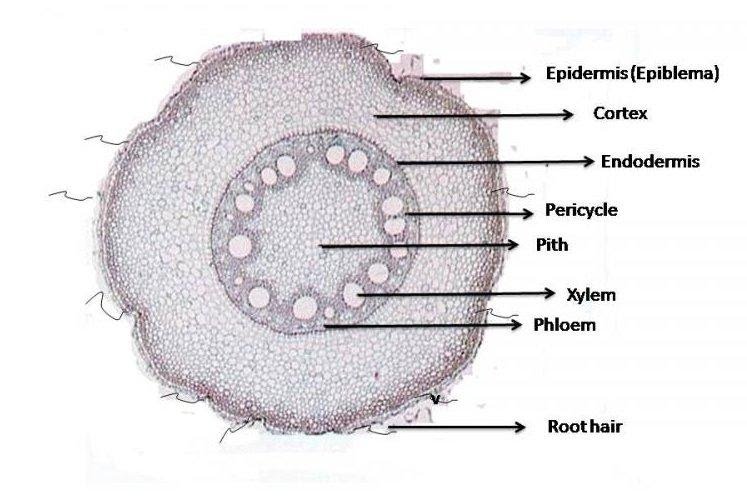 Reaching the endodermis, water then enters the xylem. The xylem is a tissue of dead cells which contributes to the vascular system of plants by being the transportation medium for water and dissolved mineral ions…