Pollutants such as those found in tobacco smoke, asbestos, and fungal spores can adversely impact on the respiratory system by causing short-term and long-term damage.

Asbestos was a building material whose disturbed, fine particles lodged themselves in the lungs upon inhalation, and caused damage over time. Symptoms only occurred many years or decades after exposure.

Fungal spores are omnipresent in the air and are usually dealt with by the immune system without trouble. If inhaled in high quantity they can sensitise the respiratory system and be dangerous to sufferers of asthma, or cause more severe infections in those who are immunocompromised.

The chemicals contained in tobacco cigarette smoke (several thousand types) do damage to the cilia that line the respiratory tract and move dirt particles away from the lungs e.g. pollutants, pathogens, dust. These protrusions from the lungs, trachea and nose are sensitive to toxins and following long periods of sustained damage can cease to function. Cilia damage results in a failure to remove lung mucus and thicker mucus building up in the lungs. This causes an unproductive cough. 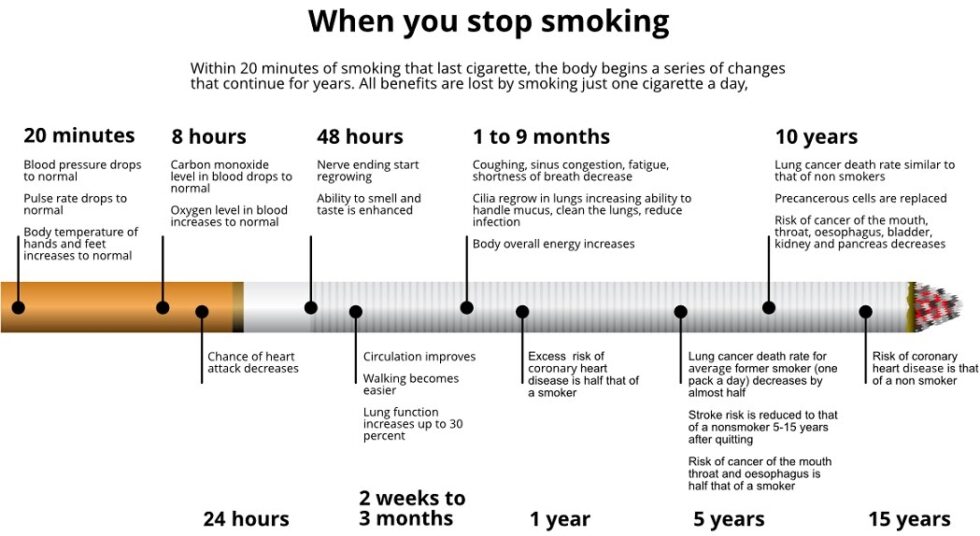 Short-term, smoking decreases circulatory and lung function, which returns back to previous levels shortly after stopping smoking. Many other effects are long-term.

The buildup of debris in the respiratory tract renders someone more prone to bacterial infection such as chronic bronchitis. This manifests itself through inflammation of the airways and constitutes a kind of chronic obstructive pulmonary disease (COPD). Symptoms include coughing, increased mucus production, shortness of breath and wheezing. Chronic, as opposed to acute bronchitis lasts for more than 3 months.

Fibrosis is the accumulation of scar tissue as a result of damage or bacterial infection. It affects the aveoli primarily, as they are ever so small and fragile. So fibrosis is not a disease in its own right, but a result….