A decrease in the cell cycle beyond appropriate levels would lead to degenerative disease, while too high an increase would cause tumours. Therefore, a balanced cell cycle is key to the good functioning of the body.

Within the dividing cell, it starts with gap 1, G1, continues into the S phase (S is for Synthesis) where DNA replicates, followed by gap 2, G2, and ending with mitosis.

G1 and G2 may sound like codes for some complex enzymes, but they are mere notations for gaps 1 and 2, which are just that: gaps between mitosis and DNA replication (in the S phase) respectively. G1 through to G2 – that’s G1, S phase and G2 – are all stages which collectively are known as interphase. Inter = between; phase = …phase, so interphase is just the stage between a cell’s creation and that cell’s division by mitosis. 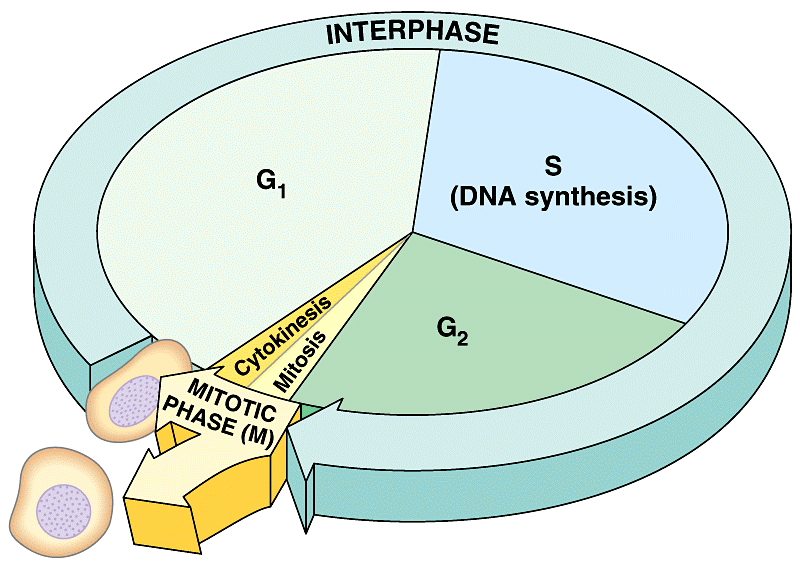 Mitosis is the process by which cells divide to achieve growth and repair by simply increasing cell number. For unicellular organisms, cell division is actually their reproduction itself (asexual reproduction). The dividing cell is called the parent cell, and the resulting two cells have inappropriately been called daughter cells by scientists so far. Now because cells don’t have a damn gender and we are better than accepting silly nonsensical received wisdom about what to call these cells, we will call them offspring cells instead. The offspring cells are genetically identical i.e. clones, as they contain copies of the parent cell’s DNA.