There are multiple techniques available in research and medicine to study the brain for various purposes including diagnosis and psychology research.

Functional magnetic resonance imaging (fMRI) is used more so in research than medicine, and gives a picture of brain activity based on increased blood flow correlated with neural activity. 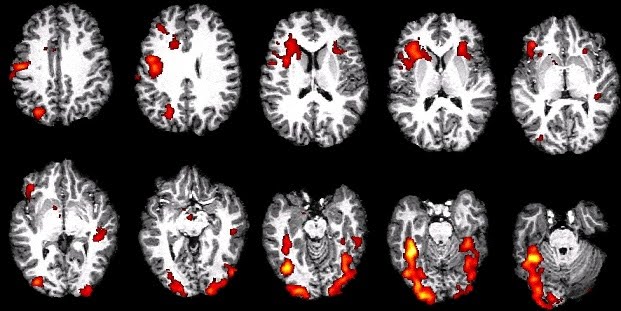 By processing the data obtained through the procedure (which involves picking up the blood flow differences via magnetic fields and radio frequency waves), a map of brain activity emerges. Within an experiment, this is cross-referenced with a control state, whether for a patient or group of participants in a study, in order to interpret the data.

Limitations of fMRI include noise which interferes with the signals e.g. from heat in the vicinity of the scanner, movement of the participant or system noise coming from the hardware, and statistics needed to make use of the raw data. Sometimes the statistics used was not robust enough to distinguish between real differences in brain activity and noise. Famously, the fMRI data of a dead salmon was used to show real differences…….