🚴🏿 Transport of materials between the circulatory system and cells

Lymph is formed from the interstitial fluid found throughout tissue and is similar in composition to blood plasma, lacking red blood cells. The lymphatic system plays a role in circulating blood back to the heart as well as passing it though the lymph nodes to clear it of any infectious agents. 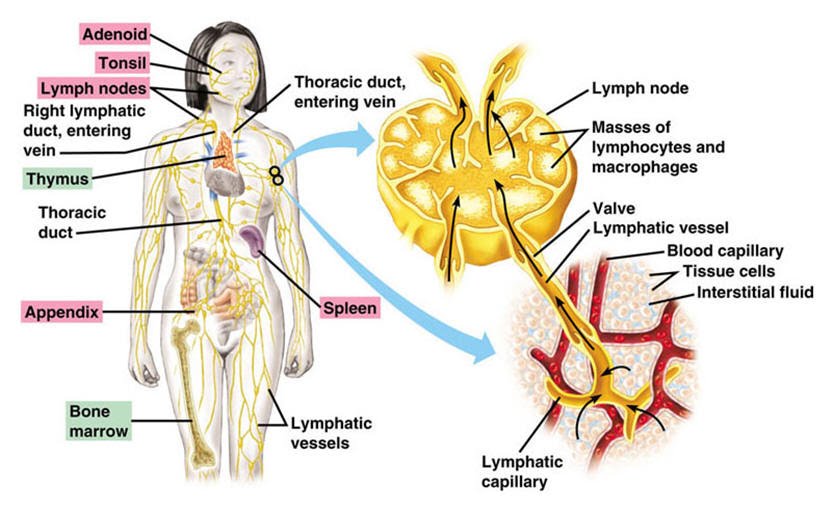 Tissue fluid is found between cells and its role is to transport oxygen and nutrients from blood to cells, and waste products and carbon dioxide back to blood. It is similar to blood plasma, lacking blood cells and proteins. 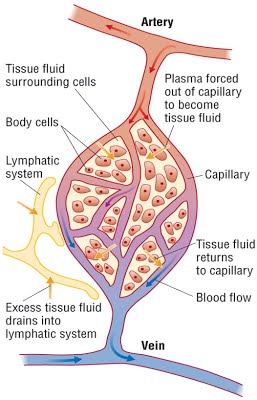 Hydrostatic pressure determines the flow of these fluids between the different systems in a tissue. The oxygenated blood travelling through capillaries from arterioles has a high hydrostatic pressure, pushing the liquid outwards through small pores. This contains all the nutrients and gases cells need, which cross plasma membranes via diffusion or facilitated diffusion. Big components of blood such as cells and plasma proteins cannot escape the capillary, so stay in the blood.

The tissue fluid is then collected back via a water potential difference between itself and blood. Water moves by osmosis back into the blood in capillaries due to blood having more solutes and hence a lower water potential. This is a special subtype of osmosis called oncotic pressure a..