Bacteria are nowhere near the only agents of disease of biological origin. We’re talking parasites (protozoa), viruses and fungi for starters. Fungi are very different from bacteria, they’re eukaryotic! They’re also more closely related to animals than plants. Viruses, as previously covered, aren’t cells nor alive. Protozoa are (also eukaryotic) single-celled organisms. So without further ado, let’s see what the transmission, mode of infection and pathogenic effect are in stem rust fungus on cereal crops, common flu and malaria.

This infection of cereal crops (including wheat) by fungi, specifically Puccinia graminis, has been an issue in agriculture since time immemorial, although fungus-resistant wheat strains became available since the 1950s. Can you see why it’s called stem rust? The fungus colonises the parts of the crop above ground level, and compromises the harvest very rapidly by disrupting seed development, as well as other symptoms of a diseased plant such as dead stems by breakdown of the surface barrier used for transpiration. This leads to uncontrollable water loss by evaporation. 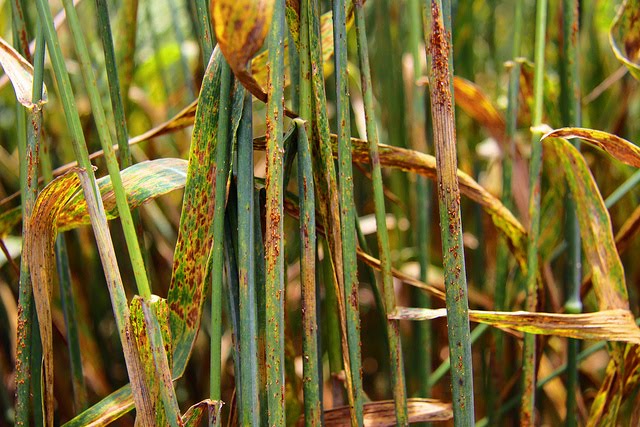 The infection starts when the fungal spores carried by air land on the crop and establish themselves at the site through uredinia which are those reddish pustules. The infection affects the outer layers of the stalk and decreases the number of tillers produced by the plant. Fungicides can be used to prevent this infection.

Influenza, what a joy! I think by this point we know that flu is caused by a virus that has an infinite mutation potential that makes vaccines very fleetingly efficient (taken on a yearly basis). But! Who is influenza and what does it do?

Influenza is a virus part of the mind-blowingly named Orthomixovirus family, and is transmitted between hosts via droplets carried by sneezing or coughing. It presents symptoms between 2 and 10 days post-infection, such as fever, cough and nasal congestion. Unlike the..